How to save $1 million completely tax free

My favorite retirement account is a Health Savings Account, or HSA.  I know, I’m weird.  But hear me out.

An HSA is the best of both worlds.  It has the benefits of an IRA (pre-tax funding) and a Roth IRA (tax-free withdrawals) as long as they’re used for health care related expenses.  And the advantages don’t stop there.

What many people miss out on is the third benefit: tax-free growth.

In practice, what I usually see is clients contributing to an HSA if they’re on an HSA eligible high deductible health plan (HDHP).  Some contribute roughly what they think they will use in a given year, similar to a Flexible Spending Account (FSA).  But unlike an FSA, you don’t lose any unused funds in an HSA.  They continue to accumulate until you decide to withdraw them.

Other clients contribute the maximum to their HSA and then use it for medical expenses as they occur.  Again, this is great, but they’re still missing that third benefit of tax-free growth.

And did you know you can reimburse yourself from your HSA for medical expenses incurred in previous years?  That’s right, previous years.

Let’s say you went to the ER in 2010 and had medical expenses of $5,000 out of pocket, which were not otherwise reimbursed or deducted as a medical expense on your 2010 tax return.  As long as you had the HSA established at that time in 2010, you can reimburse yourself from your HSA funds at any time.  So if you need the money now in 2021 and have sufficient funds in the HSA to cover it, you could take a $5,000 distribution completely tax free.

Now here’s where it really gets interesting: What if you and your spouse begin contributing to an HSA when you’re age 30 and continue contributing the maximum allowed each year until you turn 65?  Your total contributions over that 35-year period would be roughly $270,000.  And assuming the same 7% rate of return, your account balance would be worth approximately $1,087,961.  Even better, the cumulative tax savings, assuming a 22% federal tax rate, 5.75% state tax rate and a 7.65% FICA tax rate would be an additional $95,651.  If you were able to invest those tax savings each year, they would grow to over $385,000!

See the chart below (Exhibit 1).

I imagine right now you might be thinking, “But do I really need over $1 million that’s dedicated toward health care related expenses?”  Maybe.  Let’s see how you can use it:

HSA’s can be even more valuable to early retirees since they typically are on a high-deductible health care plan prior to Medicare eligibility at age 65.  And while most qualified retirement plans are not accessible without penalty before age 59.5 (with some exceptions), eligible reimbursements from HSAs have no issues.

So there you have it – my favorite retirement account, the HSA.

All written content on this site is for information purposes only. Opinions expressed herein are solely those of MF, unless otherwise specifically cited.  Material presented is believed to be from reliable sources and no representations are made by our firm as to other parties’ informational accuracy or completeness.  All information or ideas provided should be discussed in detail with an advisor, accountant or legal counsel prior to implementation.

The information on this site is provided “AS IS” and without warranties of any kind either express or implied. To the fullest extent permissible pursuant to applicable laws, MF disclaims all warranties, express or implied, including, but not limited to, implied warranties of merchantability, non-infringement, and suitability for a particular purpose. MF does not warrant that the information will be free from error. None of the information provided on this website is intended as investment, tax, accounting or legal advice, as an offer or solicitation of an offer to buy or sell, or as an endorsement of any company, security, fund, or other securities or non-securities offering. The information should not be relied upon for purposes of transacting securities or other investments. Your use of the information is at your sole risk. Under no circumstances shall MF be liable for any direct, indirect, special or consequential damages that result from the use of, or the inability to use, the materials in this site, even if MF or an MF authorized representative has been advised of the possibility of such damages. In no event shall Manuka Financial have any liability to you for damages, losses, and causes of action for accessing this site. Information on this website should not be considered a solicitation to buy, an offer to sell, or a recommendation of any security in any jurisdiction where such offer, solicitation, or recommendation would be unlawful or unauthorized. 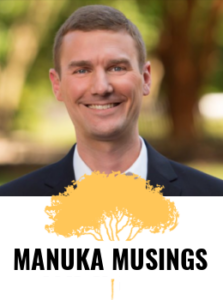 Welcome to Manuka Musings where I share tips, news, and helpful information about all things finance.

“What Should Your Retirement Age Be?”

“9 Ways to Get Income in Retirement”

“4 tips for saving for retirement, according to a financial planner who helps people retire early”

“If you’re considering retiring early, this CFP has 4 important tips for you”